In this post I will talk about a problem that affects many (if not all) drivers in OpenStack Neutron and how it was solved for the OVN driver (AKA networking-ovn).

In a common Neutron deployment model, multiple neutron-servers will handle the API requests concurrently. Requests which mutate the state of a resource (create, update and delete) will have their changes first committed to the Neutron database and then the loaded SDN driver is invoked to translate that information to its specific data model. As the following diagram illustrates: 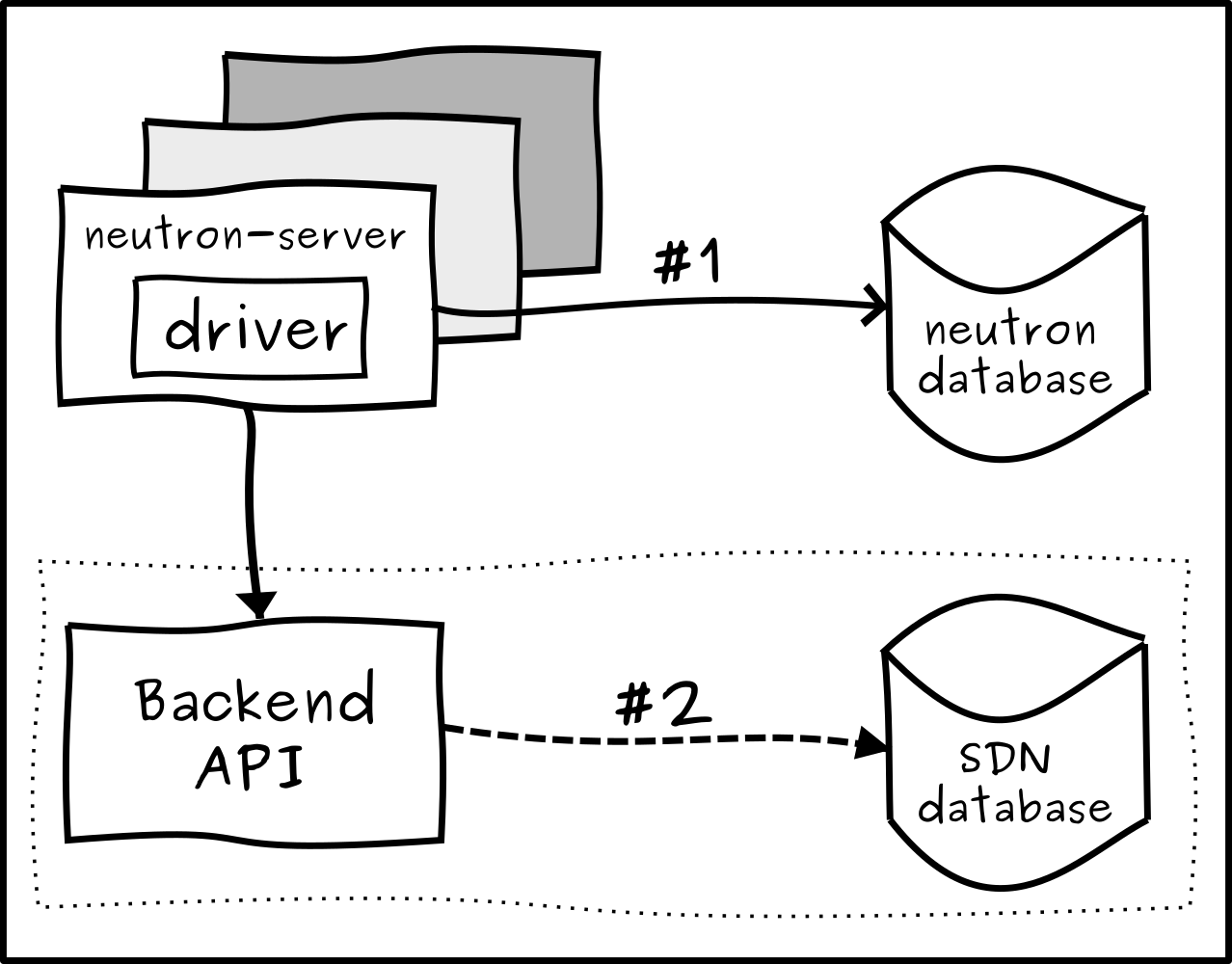 The model above can lead to two situations that could cause inconsistencies between the Neutron and the SDN databases:

When two or more updates to the same resource is issued at the same time and handled by different neutron-servers, the order in which these updates are written to the Neutron database is correct, however, the methods invoked in the driver to update the SDN database are not guaranteed to follow the same order as the Neutron database commits. That could lead to newer updates being overwritten by old ones on the SDN side resulting in both databases becoming inconsistent with each other.

The pseudo code for these updates looks something like this:

The second situation is when changes are already fully persisted in the Neutron database but an error occurs upon trying to update the SDN database. Usually, what drivers do when that happens is to try to immediately rollback those changes in Neutron and then throw an error but, that rollback operation itself could also fail.

On top of that, rollbacks are not very straight forward when it comes to updates or deletes. For example, in the case where a VM is being teared down, part of the process includes deleting the ports associated with that VM. If the port deletion fails on the SDN side, re-creating that port in Neutron does not fix the problem. The decommission of a VM involves many other things, in fact, by recreating that port we could make things even worse because it will leave some dirty data around.

The revision_number attribute is used by networking-ovn to solve the inconsistency problem in four situations:

1. Storing the revision_number in the OVN database

To be able to compare the version of the resource in Neutron against the version in OVN we first need to know which version the OVN resource is present at.

Fortunately, each table in the OVN Northbound database1 contains a special column called external_ids which external systems (such as Neutron) can use to store information about its own resources that corresponds to the entries in the OVN database.

In our solution, every time a resource is created or updated by networking-ovn, the Neutron revision_number related to that change will be stored in the external_ids column of that resource in the OVN database. That allows networking-ovn to look at both databases and detect whether the version in OVN is up-to-date with Neutron or not. Here's how the revision_number is stored:

2. Performing a compare-and-swap operation based on the revision_number

To ensure correctness when updating the OVN database, specifically when multiple updates are racing to change the same resource, we need to prevent older updates from overwritten newer ones.

The solution we found for this problem was to create a special OVSDB command that runs as part of the transaction which is updating the resource in the OVN database and prevent changes with a lower revision_number to be committed. To achieve this, the OVSDB command does two things:

1 - Add a verify operation to the external_ids column in the OVN database so that if another client modifies that column mid-operation the transaction will be restarted.

A better explanation of what "verify" does is described in the doc string of the Transaction class in the OVS code itself, I quote:

"Because OVSDB handles multiple clients, it can happen that between the time that OVSDB client A reads a column and writes a new value, OVSDB client B has written that column. Client A's write should not ordinarily overwrite client B's, especially if the column in question is a "map" column that contains several more or less independent data items. If client A adds a "verify" operation before it writes the column, then the transaction fails in case client B modifies it first. Client A will then see the new value of the column and compose a new transaction based on the new contents written by client B."

When things are working as expected the two items above should ensure that the Neutron and OVN databases are in a consistent state but, what happens when things go bad ? For example, if the connectivity with the OVN database is temporarily lost, new updates will start to fail and as stated in problem 2 rolling back those changes in the Neutron database is not always a good idea.

Before this solution we used to maintain a script that would scan both databases and fix all the inconsistencies between them but, depending on the size of the deployment that operation can be very slow. We needed a better way.

The solution for the detection problem was to create an additional table in the Neutron database (called "ovn_revision_numbers") with a schema that look like this:

This table would serve as a "cache" for the revision numbers correspondent to the OVN resources in the Neutron database.

For the different operations: Create, update and delete; this table will be used as:

Neutron has a concept of "precommit" and "postcommit" hooks for the drivers to implement when dealing with its resources. Basically, the precommit hook is invoked mid-operation when the Neutron's database transaction hasn't being committed yet. Also important, the context passed to the precommit hook will contain a session to the active transaction which drivers can use to make other changes to the database that will be part of the same commit. In the postcommit hook, the data is already fully persisted in Neutron's database and this is where drivers are suppose to translate the changes to the SDN backend.

By looking at the differences in the revision_number's on both tables is how inconsistencies are detected in the system.

The pseudo code for the create operation looks like this:

The pseudo code for the delete operation looks like this:

If deleting a resource succeeds in Neutron but fails in OVN, the inconsistency can be detect by looking at all resources where the standard_attr_id column equals to NULL.

When the deletion succeeds in both databases the entry in the ovn_revision_numbers table can then be delete as well.

The pseudo code for the delete operation looks like this:

Now that the algorithm to detected inconsistencies has been optimized we were able to create a maintenance task that runs periodically (every 5 minutes) and is responsible for detecting and fixing any inconsistencies it may find in the system.

It's important to note that only one instance of this maintenance task will be actively running in the whole cluster at a time, all other instances will be in standby mode (active-standby HA). To achieve that, each maintenance task instance will attempt to acquire an OVSDB named lock and only the instance that currently holds the lock will make active changes to the system.

The maintenance task operation is composed by two steps:

Resources that failed to be created or updated will have their standard_attr_id column pointing to the numerical id of its counterpart in the standardattributes table but, their revision_number column will be different.

Resources that failed to be deleted will have their standard_attr_id column set to NULL. To fix this type of inconsistency, the maintenance task will try to fetch the resource from the OVN database and; if found, the resource and its entry in the ovn_revision_numbers are deleted. If not found, only the entry in the ovn_revision_numbers is deleted.

Note that, the order in which the resources are fixed is important. When fixing creations and updates the maintenance task will start fixing the root resources (networks, security groups, etc...) and leave the leaf ones to the end (ports, floating ips, security group rules, etc...). That's because, say a network and a port (that belongs to that network) failed to be created, if it tries to create the port prior to creating the network that operation will fail again and it will only be fixed on the next iteration of the maintenance task. The order also matters for deletion but in the opposite direction, it's preferable to delete the leaf resources before the root ones to avoid any conflict.

Conclusion and other notes

This was a long post but I hope it will make it easier for people to understand with a certain level of detail how networking-ovn is dealing with this problem.

Also, In the OpenStack PTG for the Rocky cycle other Neutron driver developers were interested in implementing this approach for their own drivers. It was then decided to attempt to make this approach more generic2 and migrate the code to the Neutron's core repository so drivers can consume it and avoid duplication. The specification proposing this change in Neutron can be found here.